Rating: 9/10 – Only Critism is that you learn how to use cool guns such as AK47 and MP5 only in the training period. You dont use them in the missions. Instead you use normal paintball guns.

Where did you purchase this from? – Buyagift.com and it was http://www.ramtraining.co.uk who conducted the day.

OK so arrived and turned up at this huge warehouse with guys dressed in army gear. We were instructed to get kitted up in the full gear… 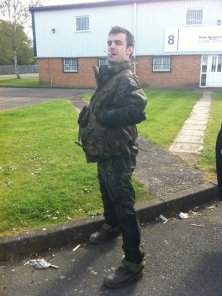 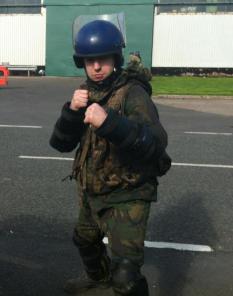 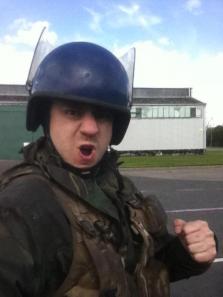 We were then taught how to use the weapons i.e paintball guns. We were taught to use MP5, AK47 and M4 machine rifles.

Then we were taught how to be riot police. This included us learning how to hold a huge shield, combining them together with other team mates to create a huge shield and then how to charge etc. 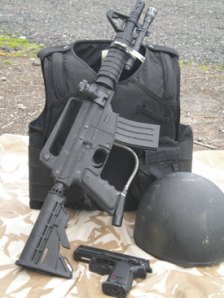 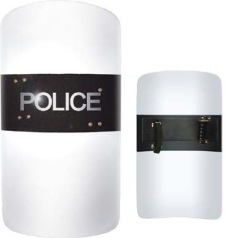 They then split the group up stating who was who in the group. I was part of the Armildilo group who were the guys in charge of the shields aka the front line people for the attack and we also had battons.. yes battons. Battons that were sponge on the outside and hard plastic in the middle. They told us we were allowed to belt shit out of the zombies when up close with the battons aslong as it was below the waist. There were only 6 of us chosen for this, then there were gunners and then a group of us who had smaller shields and BATTONS! So before the battle we were called into this room where the officers told us that an area had been overrun with zombies and since the army and police were already overrun in other parts of the UK, we had to be in charge of this area. Now to add to the realism they had a film crew acting like reporters who would interview you beforehand and who would be on the missions with you.

We all then had to run outside where a transit van awaited us. We all dived in and the van had police sirens on it. The van took us to the infected area where we all had to jump out the van, grab our designated weapons / shields and then take position. At this point all we could see was an old building and pathways around it. The SGT shouted “Armadelios up the front” so my group had to run to the front take position and hook our shields together whilst the gunners took their positions behind us. We were told to drop to our knees and before we new it we saw zombies run around the corner at us. . on top of this we were being pelted with BINs, petrol cans and slippers from zombies who appeared on top of the roof. We waited on our knees as the gunners laid into the running zombies, and then our group were told to get to our feet and charge.. as we did this the zombies ran at us and jumped on our shields – separating our huge shields together. 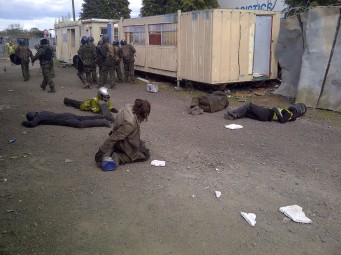 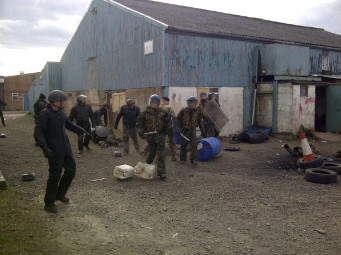 They would target one of us and try to take us to the ground.. as soon as they did this we had to help our team member by laying into the zombies with our battons.. belting chit out of them lol. They eventually fell to the ground then again the SGT called Armadliios at the front. We ran to the front combined our shields and waited for the next batch of zombies. Now at this point you are KNACKERD as not only are you holding a huge shield but using your other arm to beat these fuckers up with your batton. So literally 5 minutes into the game you are shattrerd! And the more shatterd you get the more the zombies target you.. unfortunately for us the zombies we had killed earlier on then got back up therefore could approach us from behind.. 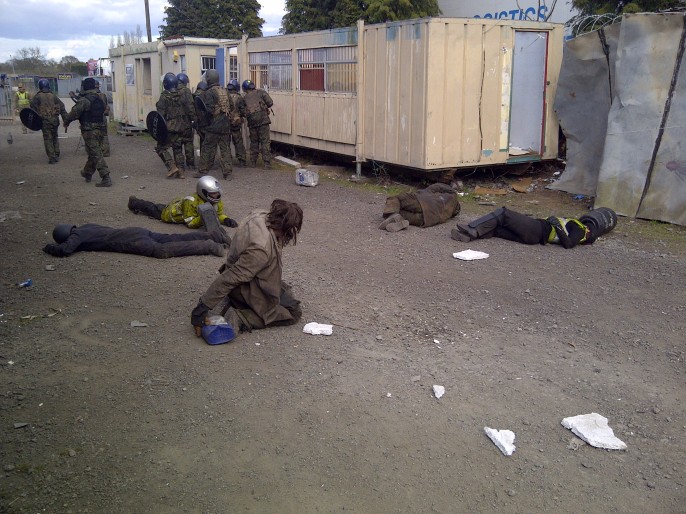 We were towards the end of the pathway and someone shouted.. behind at me.. I didn’t even have chance to look behind and this zombie jumped on me wrestling me to the ground. My batton fell under the caravan next to me so I had to rely on my teammates to helpe me.. next thing I know all my team mates are coming over belting shit out of this zombie and I manage to escape.

” get innnn..” now at this point the zombies are still attacking.. so me and around 4 others made it into the van however the sgt insisted that we get out and help our team mates. I ran out had no weopen, no shield at this point and then the reporter who used to be a human , had turned into a zombie.. he confronted me.. chasing me I tried to outrun him and jumped up on this crate in which my foot fell threw and I went flying over…whilst on the floor I looked around and just saw people on the floor being attacked whilst other team members were still using their battons as much as they could – very surreal.. I got up dived into the van and everyone else got in and shut the DOOR. As we drove away the zombies jumped on the back of the van and tried to get in as there were no windows they were grabbing us.. remember this was whilst we were driving lol.. eventually we gathered speed and they fell off!

Im not kidding you I was completely shagged at this point! Had no energy at all. Worst ive ever been! We had half hour rest then came the next mission where I was a gunner and we had to go into a warehouse , clear it out and rescue someone . This was hard as the helmet and visor were very dirty and you couldn’t see shit so literally I think I shot a few of my team mates hehe by accident.

That was the end of it but a the end I was so knackerd I got home and went to bed at 9:30pm lol.

It was a great day out and so realistic.. I mean the fact you can belt shit out of the zombies with battons and shields was awesome. Didn’t get to use guns that much, however the riot training and shields gave you that experience that other paintball companies don’t do. Loved it!
wevee purchased the dvd which will be with us shortly.

I would derfearnelty recommend this to anyone… even small girls as there were lots on our team. It really does get the heart going and does play tricks with your mind, as once your seperated from the group..you literally have to fend for yourself therefore very realistic.

One thought on “Zombie Bootcamp”