Rate out of 10:  7 – This place is actually alot better than I orginally thought it would be. Theres cheap booze, fryups in every place you walk in, nice beaches and no language barrier. Had alot of larfs here.

Funniest /most memorable moment: Me and Bob slipping/tripping up in the morning trying to rush to get on set whilst still pissed from night before.

Ive always been a fan of the ITV series Benidorm. Me and Bob went away to Crete with my family in 2010 and met 2 great great  girls over there (Emma and Zoe) who just so happened to be working on the show Benidorm. We got really friendly with them and exchanged details. Later in the year Emma contacted us stating that she could get us on the show and if we would like to come over to Benidorm. Naturally we said yes.

When we arrived at the hotel we spoke to Emma on the phone who told us she was on set and we couldnt meet her just yet until later. Me and Bob decided to go out and visit the bars. The first bar we came to featured 1 Euro a pint – this was in 2011 which i think is bloody great! Stayed here then moved around all over to get our bearings. Whilst about we also saw this dude on a bike. Anyone whos a Benidorm series fan will know this bike appeared on the show on one of the episodes too hehe. 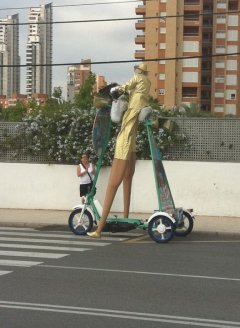 Later on we met up with Emma and one of the producer guys and they showed our names written on the official casting list of the show lol. Then we headed out to drink and do some Kareoke.Emma also took me to the bar they film the “bar/night entertainment” area in the show..aka Neptunes. 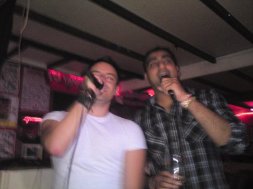 After a heavy night we had to get up at 6:30am. Me and Bob were woken by 5 calls off Emma waiting for us downstairs. We had overslept  so i quickly got up still half pissed shouted at Bob to get up who was passed out on the bed. I ran to bathroom, tripped over my clothes and quickly jumped into the shower.. Bob then had shower after me and slid up in the shower!! It wasnt funny at the time as we were both still pissed and had to rush lol

Finally met Emma at 6:30am and waited for our ride to the set. This is how we looked:

We arrived on set and had some buffet breakfast. Slowly one by one the characters from the show started to arrive. I didnt want to run up to them like a crazy fan so i thought id leave them too it …for now!

We met the other extras and basically waited to be called on. Little did i know that they actually take all day just to shoot one scene. We were given fake wristbands for the “Solana” resort the characters stayed in and then we were asked on set and this was a big moment for me. As i walked on i saw the pool and the characters all getting ready. It was so weird being by that pool that i have been watching on my tv screen for the last 2 years. 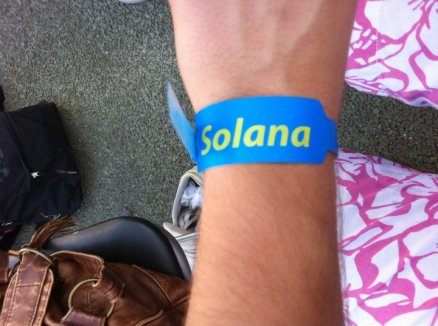 The scene was in the first episode of series 3 where the new girl character lap dances for Michael in the chair. Me and bob are in the background supposingly acting as if were gulping at the girl and gernerally looking over at what was happening at them. We spent all day shooting from different angles and started to get really HOT, so teefed some of Emmas Factor 50. Whilst waiting around in between shots we got mingling and had our pics taken with some of the characters. 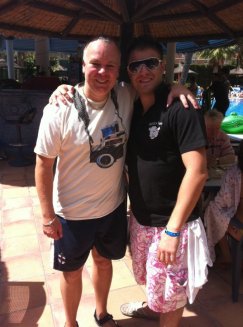 Mateo (Spanish Waiter) was a good laugh. Has almost posh accent and really cool guy to talk too. Got little time to speak with the Dad of the family but he seemed cool aswel. This was picture of us appearing on live TV in the background lol 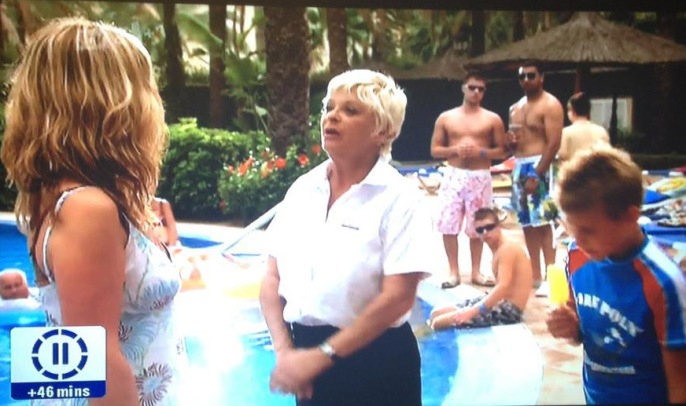 We finished filming around 7pm and headed back knackerd for a kebab then Emma informed us we must meet them in a bar later on as all the actors etc would be out.. went out and partied with them all. Only some of the actors turned up but also got to party with some of the staff aswel who were great fun.

The second time I came here was with my Dad. We were very fortunate for Emma to of put us up in the hotel room. I showed him the full sites of this cool place.  One day we went to a small island by boat for a submarine ride. We all cued up and finally got inside when Dad turned around to me and said “Joe I dont like this” I said erm Dad were in a submarine what do you want me to do? “He said no, i need to get out”.. so i quickly raced to the top of the deck and luckily we got off before it went under. We had to then stay on the Island until the submarine came back up so that a boat could then take us all back to the main Island – I didnt let him live it down thow hehehehe.

We saw Girls aloud tribute band too which was cool. Funny getting mashed with me Dad! 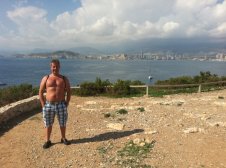 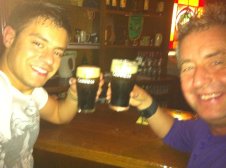 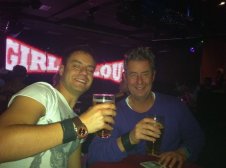 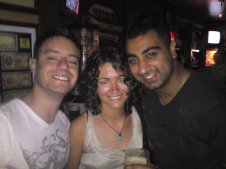 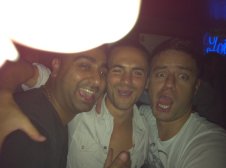