Spooky Tunes on the Piano and Storytelling For Halloween 2016

So this was my 2nd gig at the Black Country Museum.

Since it was a Halloween event involving a piano, I had to think about ways in which I could do this event. After going through lots of weird n scary ideas I finally chose to get me Dad involved. He would be the storyteller whilst I would play well known Scary songs on the piano.

We chose to look into “exisiting” ghost stories at the museum and then “elaborated” them so we could add our songs and gimics to the show – afterall this was meant to be entertaining!

The setting for our stories and piano playing was the Bottle n Glass Pub. 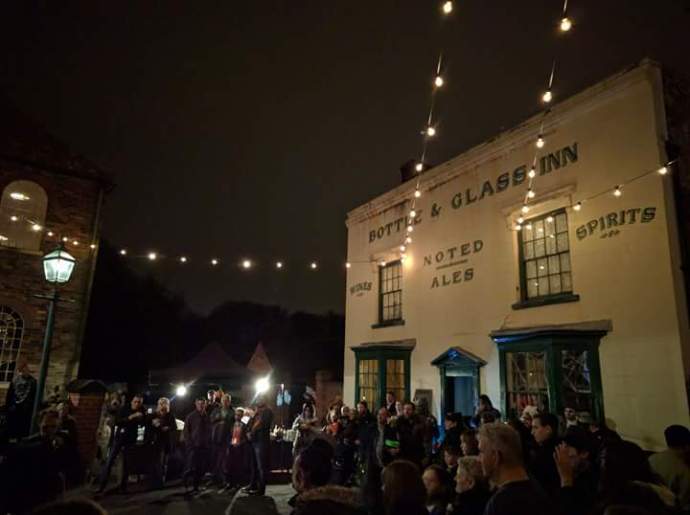 Our first night arrived and we got to museum all in good time to setup our set. The Bottle N Glas room with piano was perfect for a “Scary / spooky” setting for ghost stories as only had candle light and no electricity This is how it looked:

Now this was also Halloween so we had to dress up  right??? TOO RIGHT – I love dressing up! I had dusted the cobwebs off the old RABBIT outfit..it was time for him to come out to play again…my Dad chose to dress as the mad hatter aswel which looked great as had top hat etc. This is how we looked:

Now the only issue which my costume was that I couldn’t play piano whilst having this Rabbit head on as I couldn’t see shit…so I chose to wear a pirate outfit with an axe in it… fortunately this adjustment went with what I was already wearing, oh and allowed me to actually see what the fook I was playing! 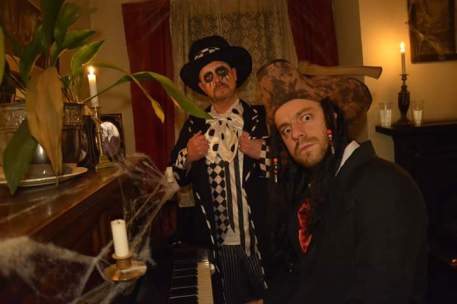 The tunes I chose to learn were:

We chose to do 2 stories and perform for 15 minutes at a time. We would perform on average 4- 5 times each night as we figured people dont want to be listening to stories for half an hour at a time (especially since there was lots of other stuff going on at the event).

The first story involved an 18th Century Small boy  called Isaac and a horse who fell into the canal.  I played “The Fog” soundtrack whilst this story was told. Attempts were made to save the horse but not the boy due to the horse being worth more back in them days (I chose to play dramatic music when they both fell in the canal ) The boy then came back and haunted the master who didnt save him. Master would sit in the pub (that we were in) and see ghost like images at the window…..feel ghostly hands around his ankles n so on.

The 2nd involved me playing the theme from “Cape Fear” . The story involved a hated man in the village who used tools in the local pubs cellar. One night locals heard a scream from the cellar…and when the cellar door was opened found “Hopwoods” head crushed in a vice (Hopwood being our character name). Now the key to this story was the shock / entertainment value.  When locals heard the scream My Dad would stop speaking and I would stop playing..My Dad would then scream really loud to scare people..I would then begin playing theme from “The Exorcist” as it was told about how the cellar door was locked from the inside and murderer never found.

Now the comic value this story was that when the man was buried, his head had gone missing…rumour has it locals stored it in a jar and pickled it for all to see in the bar. … was it Folk Tales???  – My Dad then stopped the story reached under his hidden black blanket and revealed the Head in the jar…and would go around  shoving it in peoples faces. This jar made people laugh (I also played dramatic music whilst My Dad was showing people the jar .. people seemed to love it!

This was Hopwoods head in the pickled jar:

Our gigs went great. It seemed busier on the Saturday night which meant full rooms and plenty of atmosphere. It was my Dads first gig and he loved the buz when people clapped n laughed in all the right places. Audience were amazing! We had worked hard on getting the tunes right, the stories n props right etc…so with the great response from the audience it really made us feel appreciated 🙂 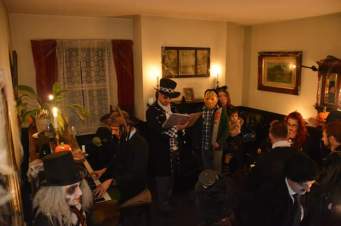 We even had a special appearance from me recently born Nephew with me Sister,  me Brother in law n Mother Dear. As per usual their outfits looked scary! 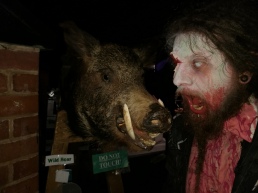 In between sets I chose to  stand in scary spots on the grounds waving at people with me Rabbit outfit and having pics etc . One of which featured me standing in the top of the pub window waving at people as they stood in the small village square watching the other entertainers.

Me Sexy lady aswel was out n about taking photos of people and also looked very bloody in her nurses outfit!

This was a great event, even better that I got to do it with me Old Man!